The Sino-German symposium “The Yunnan Biodiversity Hotspot Project – program, objectives, and application” was held in Dresden, Germany, April 02‐06, 2016. The symposium brought together 40 representatives around the world.    The symposium was for the joint multidisciplinary “The Yunnan Biodiversity Hotspot Project”. The major objective was to discuss the outline and content of the preproposal which has to be submitted to the German and Chinese National Science Foundations, respectively (DFG and NSFC)  in summer 2016.
The symposium was under the leadership of Volker Mosbrugger (Senckenberg) and Zhou Zhe‐Kun (XTBG). Researchers from the Paleoecology Group and Alice Hughs of XTBG participated in the symposium and presented their research progress.
Prof. Zhou Zhekun made an over presentation entitled “Evolution and extinction of some plants and their response to Asia Monsoon climate” . Dr. Su Tao presented “Selected Neogene floras of Yunnan in the project”. Then Alice Hughs talked about “Understanding changing patterns of diversity in Yunnan and beyond”.
During the symposium, a Letter of Cooperation Intent was signed between XTBG and Fankfurt Senckenberg Research Institute and Nature Museum of Germany. The two sides aim to enhance cooperation in scientific research, personnel exchange, and science communication. 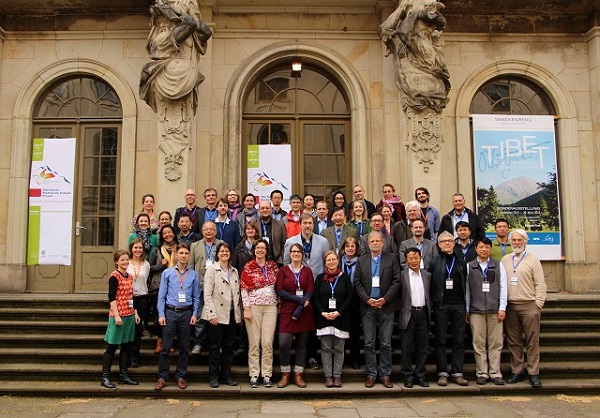 The Sino-German Meeting: The Yunnan biodiversity hotspot—its history and future threats, was held in Kunming, Yunnan on August 4-10. The meeting was funded by the Sino-German Center of the Natural Science Foundation of China (NSFC). The meeting was jointly hosted by Prof. Zhe-Kun Zhou from XTBG and Prof. Volker Mosbrugger from Senckenberg Research Institute and Museum. More than 60 scientists from China, Germany, UK, Japan and Netherlands attended the meeting in Kunming.

39 oral presentations were made during this meeting. The presentations covered such topics as paleoclimatology, paleontology, paleomagnetics, paleoanthropology, biogeography, molecular biology, evolutionary ecology and palynology. Many participants showed their recent research progress, for example, reconstructing paleoclimate and paleoaltitude using fossil plants, the new methods of paleomagnetics, reconstructing paleoenvironment and paleoclimate by isotope, the combination of molecular biology and evolutionary biology, high resolution paleoclimate reconstruction, palynology and paleofire reconstruction. The researchers not only focus on Asia and Europe, but also on other regions, even global area.

The meeting provided an excellent impetus for further Sino-German exchanges. TheParticipantsexplicitly agreed on continuing and even intensifying the existing cooperation after three-day oral presentations and discussion, because Yunnan represents a key region where the impact of past changes on biodiversity can be exemplified in order to understand ongoing and anticipated changes in biodiversity. Conclusively it was decided to set about a joint major research project focusing on biodiversity of Yunnan, as one of the actual, global biodiversity hotspots. Fruitful and intense discussions have been seen in the meeting, which increased the knowledge about the history and future threats of the Yunnan biodiversity hotspot.

After the meeting, the participants investigated the biodiversity, vegetation and fossil sites in Northwest of Yunnan.

The 9thEuropean Palaeobotany and Palynology Conference was held on August 26-31 in Padova, Italy, which brought together more than 500 participants from Italy, UK, Germany, France, USA, China, Japan, and other countries. Prof. ZHOU Zhekun and 4 young scientists of XTBG were present at the conference.

36 symposia were organized for the conference ranging from general topics to Palaeozoic, Mesozoic and Cenozoic palaeobotany and palynology. Many symposia were related to the Quaternary and Archaeobotany, for which Italy is famous.

Fossil wood of Tsuga (Pinaceae) from the Late Miocene of Central Yunnan, China and its palaeoclimatic implication (Bondarenko, Olesya V.)

The first fossil fruits of Burretiodendron (Malvaceae s.l.) and associated leaf from the Late Miocene of Yunnan，China and its environmental implications (Lebreton-Anberrée, Julie)

Estimating paleo-CO2 levels from the late Paleocene–early Eocene to Late Pleistocene based on fossil leaf of Metasequoia (Wang, Yuqing)

Moreover, two images of plant fossils by ZHOU Zhekun and his team were on display at the conference.

Images of plant fossils by XTBG display at the conference: Quercus sp. pollen

Images of plant fossils by XTBG display at the conference: Rosa sp. leaf

42 scientists from Germany and China gathered together at XTBG during March 19 and 25 to talk about environmental change and its impact on biodiversity. The meeting was funded by the Sino-German Center of the Natural Science Foundation of China (NSFC). The theme of the meeting was “Late Cenozoic Environmental Change in Eastern Eurasia and Its Impact on Past and Present Biodiversity”.

The meeting was jointly hosted by Professor Zhe-Kun Zhou from XTBG and Professor Volker Mosbrugger from Senckenberg Research Institute and Museum.

Prof. Volker Mosbrugger talked about the importance of the Chinese palaeobotanical record in the context of Neogene Climate Evolution in Eurasia research – state of the art. Prof. Zhou Zhekun’s presentation was entitled “The onset and evolution of Asian monsoon brought some plants close to extinction”.

participants listening to a lecture